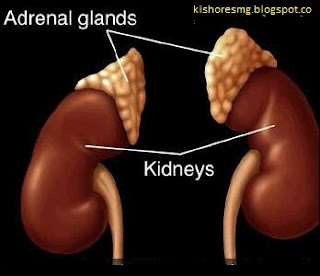 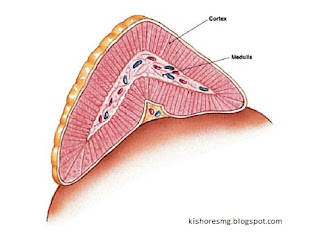 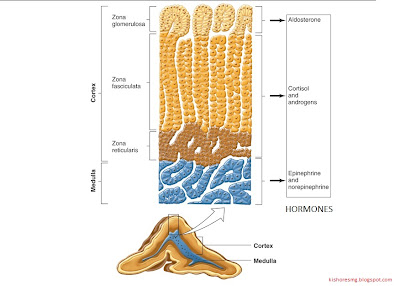 ü Stroma represents the outer most protective capsule. It is actually made of an outer coat of fibrous connective tissue and an inner zone of areolar tissue containing arterioles. Extending from the protective capsule is a number of delicate trabeculae which pass through adrenal cortex.

ü  Parenchyma consists of two zones which are different in origin, structure and function. They are called – outer adrenal cortex and inner adrenal medulla.


a)     Adrenal cortex – Adrenal cortex is derived from mesoderm. It is sub-divided into three zones.
·        Zona glomerulosa: it represents 15% of the cortex and lies inner to the protective capsule. It consists of columnar pyramidal cells arranged in the form of rounded masses around an inelastic lumen or arched loops. Glomerulosa cells secrete mineralo-corticoid.
·        Zona fasciculate: It is the middle zone of the adrenal cortex and widest of all three zones representing 70-80% of the total adrenal cortex. It consists of columnar or polyhedral or irregular cubical uninucleated or binucleated cells arranged in long straight cords usually 2 cell thick. This zone secretes gluco-corticoids which controls glucose metabolism.
·        Zona reticularis: It is the inner most zone of the cortex. It is very thin zone which represents about 5-10% of total adrenal cortex. It consists of branching cords of small cells showing network like arrangements. The cells secrete sex hormones.

b)    Adrenal medulla– It represents the central core of the gland. It is derived from ectoderm and is light brown in colour. Medulla consists of chromaffin cells containing chromaffin granules that stain brown with chromic acid or potassium dichromate. These cells are seen around large central vein that drains the capillaries of the adrenal cortex. Adrenal cortex stores and secretes the hormones- adrenalin and non-adrenalin secreted by sympathetic nervous system.