The mucosal layer is divided into gastric area which shows a number of gastric pits,into each pit a number of simple branched or unbranched gastric glands open. There are about 15-20 million gastric glands. They are tubular in character, and are formed of a delicate basement membrane, consisting of flattened transparent endothelial cells lined by epithelium.  There are two types of gastric glands. 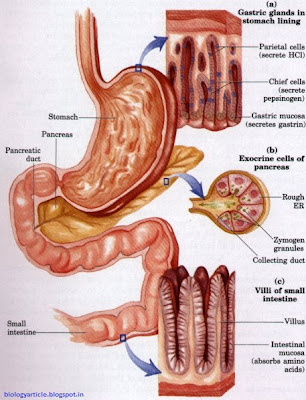 
A.    Cardiac glands: The cardiac glands are few in number, occur close to the cardiac orifice and they have more mucous secreting cells.


B.     Gastric glands:  also known as fundus glands. They occupy largest area of the stomach that almost reaches up to muscularis mucosa. The fundus glands are found in the body and fundus of the stomach; they are simple tubes, two or more of which open into a single duct. The duct, however, in these glands is shorter, sometimes not amounting to more than one-sixth of the whole length of the gland; it is lined throughout by columnar epithelium. The gland tubes are straight and parallel to each other. At the point where they open into the duct, which is termed the neck, the epithelium alters, and consists of short columnar or polyhedral, granular cells, which almost fill the tube, so that the lumen becomes suddenly constricted and is continued down as a very fine channel. They are known as the chief or central cells of the glands. Between these cells and the basement membrane, larger oval cells, which stain deeply with eosin, are found; these cells are studded throughout the tube at intervals, giving it a beaded or varicose appearance.
These are known as the parietal or oxyntic cells, and they are connected with the lumen by fine channels which run into their substance. Between the glands the mucous membrane consists of a connective-tissue frame-work, with lymphoid tissue. In places, this later tissue, especially in early life, is collected into little masses, which to a certain extent resemble the solitary nodules of the intestine, and are termed the lenticular glands of the stomach. 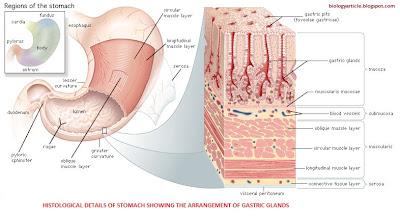 They are not, however, so distinctly circumscribed as the solitary nodules. Beneath the mucous membrane, and between it and the submucous coat, is a thin stratum of involuntary muscular fiber (muscularis mucosae), which in some parts consists only of a single longitudinal layer; in others of two layers, an inner circular and an outer longitudinal. 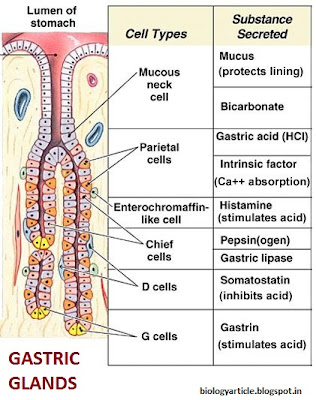 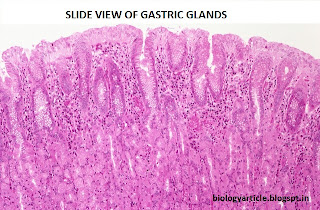 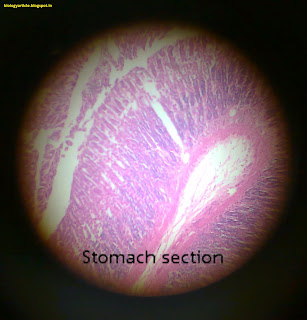