1.      THEORY OF SPECIAL CREATION: this theory was proposed by Hebrew. He stated that the life came to the existence by a super natural power called GOD. God took only 6 days to create this world. Since the theory was purely religious thinking and has no scientific base the theory got disproved.

2.      THEORY OF SPONTANEOUS GENERATION: this theory is also known as theory of abiogenesis. This theory was put forth by Aristotle. He suggested that life has originated from non-living organic matters. This theory was supported by Francisco redi. By maggots and raw met in jar experiment he stated that life is originated from non-living things. In 1765 lazzaro spallanzani, an Italian scientist disproved the theory of abiogenesis. He boiled the meet in jar and then sealed it. After several months no sign of life was reported in the jar. In nineteenth century Louis Pasteur completely disproved the theory of spontaneous generation by SWAN-NECK FLASK experiment. 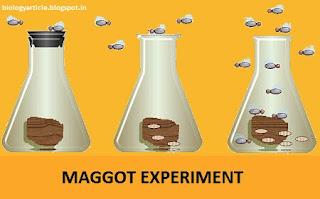 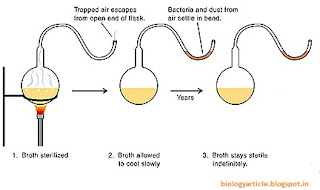 3.      THEORY OF ETERNITY OF LIFE: this theory was given by Richter, Helmholtz, preyer, Arrhenius, bondi. According to them life only changes it’s form but is never created from dead substances. It has no origin and has always existed. They concluded that life comes from life never from lifeless things. This concept was defined as theory of biogenesis. Theory of biogenesis was supported by cosmozoic theory proposed by Richter. But this theory failed to explain how the pre existing life came to exist in this world. Since the spores from the outer world couldn’t tolerate the atmospheric friction they can’t reach the biosphere and generate life.

4.      THEORY OF CATASTROPHISM: this theory was given by Cuvier. According to this theory, there had been several ups and downs in the history of the earth and that each, at the end of its period, had been wiped out by some cataclysmic upheaval, and a fresh set of organisms created on different line. However theory couldn’t explain how the first set of organisms came to exist.

5.      MODERN CONCEPT OF ORGANIC EVOLUTION: this theory is also known as theory of chemical evolution. Most appealing scientific idea of origin of life was given by A.I.OPARIN. His concepts are also known as oparin hypothesis. He published his account in his book “The origin of life” in 1936. According to this theory, life originated slowly and gradually by the doctrine of evolution which teaches us that species of any kinds are immutable but are subjected to change. Oparin explained his in physio-bio-chemical way. He considered the condition of early earth (pre-biotic earth). He explained that after the cooling process, means, the temperature of the earth reduced to less than 100°C water came to exist in liquid from. Here it clearly indicates that below 100°C formation of hydrogen bonds become easy. As a result earth experienced the sever rainfall which continued up to millions of years. Likewise assimilation of many compounds (methane, hydrogen cyanide, hydrogen molecule) free oxygen arrived on the earth. By this way the reducing pre biotic earth gradually changed to oxidizing earth.
The theory of oparin was supported by Haldane and sydney fox.

The oparin hypothesis was experimentally supported and proved by miller. By a well designed apparatus he showed the formation of protein molecules along with carbohydrates and lipids. Miller created a closed system device where the system was similar to the pre-biotic earth.

information is gathered from :
EVOLUTIONARY BIOLOGY
by:
Mohan P.Arora