IFN Signaling via the JAK-STAT Pathway

This is used as a TH1 signal to both γ B cells and macrophages, coordinating the innate and adaptive response to acute infection. While it uses a similar signal transduction to the pathway above, the receptor and specific internal pathway differs.

1. IFN is an interferon peptide that can signal γ  a. cells to resist viral infection b. B cells to class switch to some of the g heavy chains (complement-activating IgG3 and IgG1) c. Up-regulation of phagocytes and activation of ability of macrophages to present antigen d. specific development of TH cells to the TH1 response.
2. The receptor is composed of  and  subunits. JAK kinase bound to α β the cytoplasmic part with kinase activity on the other side,  and α β subunits binding JAK 1 and 2 respectively
3. INF dimer binds outside the cell the  and  subunits, causing them γ α β to associate.
4. The JAKs phosphorylate each other’s cytoplasmic receptor tyrosines, without recruiting an additional kinase.
5. The receptor now provides a docking site for a STAT protein (potential transcription factor).
6. JAKs then phosphorylate the STAT, activating it.
7. STATs leave the receptor and dimerize.
8. Dimer gets a serine phosphorylated (different cytoplasmic enzyme).
9. STAT enter nucleus and binds to promoters of interferon promoted genes.

a. Resting T cells (except for Treg) do not have the functioning α chain (CD 25)
b. Activation causes synthesis of the  chain (one of the early α genes up-regulated by the immediate genes)
c. chain is constitutively expressed, but cannot bind and signal γ on its own.
d. and  chains together can bind and signal, but the β γ intermediate affinity usually doesn't leads to a productive signal. Found in NK cells and resting T cells.
e. All three together and the overall receptor has high affinity and active signaling.  Found in active TH, TC, and B cells.

a. JAK (Janus- or Just Another Kinase) allows  and  chains to β γ phosphorylate each other.


b. STATs (Signal Transducer and Activation of Transcription) bind, receive phosphates, activate and turn on genes. Several different STATs get activated, which allows the signal to up-regulate a variety of different immune genes.


c. “Be fruitful and multiply” signals- IL-2 leads to clonal expansion of lymphocytes by promoting cell division via the Ras pathway and blocking apoptosis.


TH subsets – T cells with CD4  (TC and Tγδ set aside before decision to use CD4)
1. TH1 - cell mediated, activates for acute attack on active bacterial and viral infections and cancers.  Signals B cells to make opsonizing (complement activating) IgG3 and IgG1 antibodies.  May promote excessive inflammation and tissue injury (scorched earth- sort of life Russia in WWII.).
2. TH2 – humoral – defends body against entrenched enemies, especially helminth parasites.  Activates eosinophils and mast cells.  Signals B cells to make lots of IgM, non-opsonizing IgG and IgE.  T cells secrete IL-4 and IL-5.  Inappropriate response produces allergy.
3. TH17- inflammatory, and seems to bridge adaptive and innate responses. Secrete TNFα, but not IFNg. Seriously hostile war against something not inside your borders (sort of like US and England in WWII).  However, when it goes astray it CAN trigger autoimmune reactions
a. Cells secrete IL-17 as well as respond to it.
b. Mobilizes neutrophils and prompts secretion of antimicrobial factors by epithelia.
c. The pathway triggered in the cells receiving IL-17 is not the JAK-STAT, but rather a completely different pathway resembling the one used by the innate system TLRs.  Both activate the transcription factor NF-κB.
d. Interestingly γδ T cells and NKT cells, which both respond to lipids, protect epithelia, bridge the innate and adaptive systems, secrete IL-17s.
4. Treg – suppress immune responses. 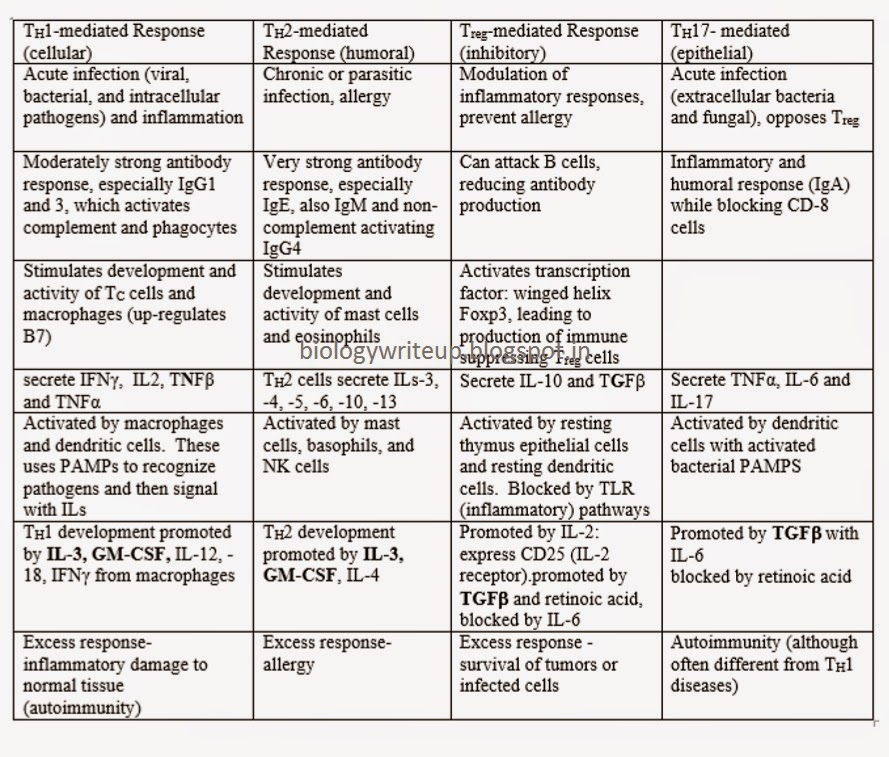 1. Caused by Mycobacterium leprae, an intracellular parasite.
2. Not particularly contagious; most people's macrophages can fend it off. Rather benign really: can't migrate on its own, doesn't produce nasty toxins.
3. In some people, however, it survives in within phagosomes of the macrophages.  Depending on how the immune system responds, the disease can take one of two courses, or, for that matter, intermediate versions.
4. Generally treatable by antibiotics (rifampicin) and (more recently) thalidomide.
5. Tuberculoid form - more typical course, resulting from a TH1 response with delayed hypersensitivity.
a. The host's cell-mediated response leads to formation of granulomas, walled-off regions of infected macrophages.
b. Most of the bacteria are destroyed by this process.
c. Skin and nerves are damaged slowly over a period of time.
d. Patients survive over the long term, but with some nerve damage and possible deformity
6. Lepromatous form – TH2 response - this is the nasty version with the bad reputation
a. humoral antibodies are released, often at excessive levels.
b. The bacteria continue to thrive, hiding in the macrophages.
c. Infection disseminates widely beneath the skin and throughout the body; destroys bone cartilage and nerves, and can kill you. Even in this form the progress of the disease is relatively slow.
d. Bacteria tend to prefer cooler temperatures, which is why infected individuals tend to lose fingers, toes, ears and noses. More evidence that fever is helpful in fighting disease.

Bacterial Septic Shock (as opposed to toxic shock, cause by superantigens)

1. Caused by overproduction of cytokines (general problem discussed previously under superantigens).
2. Gram negative bacteria - recall these are the ones that have a second membrane external to the plasma membrane and thin cell wall and usually a capsule (mostly acidic polysaccharides with some protein) as well.
3. Shock generally refers to a dangerous drop in blood pressure. In the case of bacterial septic shock, there is also high fever, diarrhea and possible blood clotting in various organs.  Also, the drop in blood pressure stems primarily from a vasodilatation of peripheral blood vessels (although dehydration doesn't help).
4. The endotoxins from the outer membrane and wall overstimulate the macrophages via the toll-like receptors.
5. The macrophages release too much of the cytokines IL-1 and TNF-a. Mechanism similar to toxic shock.
6. TNF- all by itself can induce toxic shock in mice. α
7. Possible improvements in therapy may involve monoclonal antibodies to these cytokines.

1. Caused by Trypanosoma cruzi, a member of the trypanosomes which cause a number of other nasty diseases, including African sleeping sickness and related Leishmania donovani.
2. Unicellular eukaryotes - protozoans often using various insects as vectors to transfer agents back and forth from people and cattle and other domesticated mammals.
3. The group is generally good at changing surface antigen - one member has over 100 genes coding for surface proteins.
4. T. cruzi is a particularly nasty version, living in the guts of insects that live in adobe houses.  The insects come out, suck blood from the residents and void feces, which allow the trypanosomes to enter through the break in the skin.
5. Once in the body they multiply and produce an unknown diffusible substance that blocks the  subunit of the IL-2 receptor. α
6. The suppression of IL-2 signaling prevents the TH cells from multiplying and signaling to the rest of the system.
7. The parasites then go on to destroy a variety of tissues, including heart muscle, skeletal muscle and nerves.  If they're lucky, people die of heart failure.  If they're unlucky, they die of peristaltic failure due to damage of the nerves coordinating the movement of gut muscles.

a. Hard to treat - drugs are dangerous and uncertain.
b. Heart transplants are not an option, as the immune suppressants allow the parasites to kill the patient.
c. A disease of poverty, preventable by better housing.